Blockchain offers great potential for safeguarding the integrity of clinical trial data and processes, but how does this work? ‍One of the most defining attributes of blockchain is its immutability by which it provides a permanent and unalterable record of data. This unique feature facilitates a transition from trust-based to trustless collaboration, where trust is not tied to individual reputation but embedded into the systems that we use to interact with one another.

While the implications of immutability are manifold, blockchain alone does not provide full protection against the corruption or manipulation of data. This especially holds true if a blockchain ledger is used to generate an ‘on-chain’ audit trail of activities that take place ‘off-chain’. Computer science refers to this problem as the ‘Garbage in, Garbage out’ principle: while blockchain provides an immutable record, the content of that record can still be flawed. So how does this principle relate to the context of clinical trials? In this article, we'll explain how blockchain can advance existing quality standards in clinical trial design and sound research conduct

‍Over the past decades, the clinical trial industry has seen a growing level of standardisation and regulation with the purpose of promoting scientifically sound research conduct and safeguarding against the manipulation of trial results. One of the cornerstones of clinical trial standardisation is the so-called double-blind randomised placebo-controlled trial, or in short: the randomised controlled trial (RCT). The RCT design is often referred to as the gold standard in clinical research as it mitigates bias and manipulation through the process of randomisation and blinding. Let's briefly touch upon what this exactly entails.

‍
Blinding refers to the literal ‘blinding’ of all involved actors in a clinical trial, most importantly the researchers and participants (hence the term ‘double-blind’). It ensures participants in the experimental group are not treated different from those in the control group, since both sides don’t know whether a participant is receiving the investigative product or placebo. Groups should be ‘de-blinded’ only after the trial has concluded, when the database has been locked from editing and results may be analysed.

‍For a new medicine to be approved for marketing, clinical trials must demonstrate safety and efficacy to market regulators through statistical analysis of research data. In preparation of a clinical trial, before any data is gathered, researchers must therefore define their hypotheses, research questions, and clinical endpoints in a Study Protocol. Subsequently, a detailed analysis plan is developed, also referred to as the Statistical Analysis Plan (SAP), which describes in detail which statistical tools will be used to analyse the trial results.

‍Let’s take as a basic example: testing whether paracetamol, a common painkiller, is an effective treatment against headaches. To begin with, researchers create two hypotheses, which could for instance be:

1. Null hypothesis (H0): There is no difference in headache pain severity when paracetamol is taken.

2. Alternate hypothesis (H1): There is a difference in headache pain severity when paracetamol is taken.

‍To be able to reject the null hypothesis (and thus confirm the alternate hypothesis), researchers must first decide on the desired level of statistical certainty. This is done by deciding on a so-called p-value, or probability value. A p-value of 0.05 would indicate that there’s a 1 in 200 chance that the null hypothesis is true, even if a difference in pain severity is observed in the data.

Going back to our paracetamol example, if researchers found a p-value below 0.05, this would mean that they could conclude that there is a statistically significant difference between the treatment and placebo groups, and that paracetamol affects headache pain severity with a high probability.

‍Regulations and guidelines require researchers to define their hypothesis, objectives and endpoints prior to the start of the study, and to finalise the SAP before de-blinding and analysing the clinical trial results. Inexperienced researchers or malicious actors, however, may (and have in the past) alter(ed) their hypotheses and research questions after de-blinding and analysis, if the results, for instance, seem to show an interesting effect that was not initially sought after.

This common form of questionable research practice is called HARKing (Hypothesising After the Results are Known), and greatly reduces the reliability of scientific studies. Other common questionable research practices include P-hacking or data dredging, where researchers run endless different statistical tests until a statistically significant result is found, or cherry-picking, where only favorable evidence is reported.

Recent studies show that these questionable practices tend to be widespread and reduce the reliability of clinical trial data, and thereby put the safety and wellbeing of patients (see this research article). It is therefore crucial that researchers define their hypothesis and analysis plans before the study starts and that they can prove this to regulators evaluating the efficacy of data.

‍While the randomisation and blinding features of RCTs have proven to be effective measures against bias and manipulation, they do not stop unintended and intended manipulation of clinical trial results. Similarly, while regulations stipulate that the hypotheses and analysis plans may not be altered after database lock (the moment where data collection is completed, datasets are ‘locked’, and analysis begins), there are still various ways it has been altered after the fact in the past to obtain statistical significance and beautify trial results, thereby introducing serious safety concerns to patients.

The role of blockchain — verifiable proofs of data and documents

‍Blockchain provides an effective tool for mitigating both these risks. By timestamping data on the blockchain right at the moment where it is generated researchers create verifiable proof that data and documents were present at a certain point in time and have not been altered since. Through this method, researchers can (and should) anchor their research protocol and SAP to prove they followed their initial research objectives. Moreover, patient-level data points (as well as the entire data set) can be anchored on the blockchain, again to prove and verify that the data being collected is unaltered.

With blockchain technology embedded in clinical trial software (eClinical solutions), questionable research practices can be strongly diminished. Regulators could verify against the blockchain timestamps what the initial hypothesis and objectives were and could verify each individual data point (or data-set at large) to ensure data is sound and unaltered as well as that questionable research questions are less likely to have taken place.

‍Moreover, researchers purposely wanting to beautify or otherwise manipulate trial results to better meet their stakes would find it much harder to do so, as clinical trial data is collected through multiple, independent research sites across various countries, and since only after de-blinding at the end of the study they would know which participant are receiving the investigative product instead of placebo. This is long after individual data has been timestamped on the blockchain.

Getting back to the ‘Garbage in, garbage out’ principle, this means a malicious actor would not know which data points to manipulate before these are logged and timestamped on an immutable blockchain ledger. In other words, timestamping data right at the moment where it is generated data safeguards it from corruption or manipulation at a later stage. Similarly, altering the contents of the SAP or other important trial-related documents such as the study protocol (which includes the study endpoints and hypothesis) would not come unnoticed. Through this mechanism, blockchain can help mitigate various forms of questionable research practices, improving the reliability clinical science and good clinical practice at large.

‍Verifiable proofs are relevant throughout a clinical study and during the analysis stage but also in the context of long-term archiving where clinical trial results need to be stored for many years and together constitute a drug dossier that is submitted to regulators who may authorise the medicine for market introduction. Creating verifiable proofs over the course of a study generates a verifiable audit trail that (1) lives independent of the systems used to collect data and (2) is kept available by a distributed network of computer servers (‘nodes’) who are incentivised to maintain the blockchain network. This means that long after a trial is concluded and applied eClinical systems have been retired, auditors and regulators can still verify the validity of the trial results.

Want to receive our latest insights directly in your inbox?

The Triall Newsletter provides a concise overview of product innovation updates, upcoming events, and anything else Triall-related. 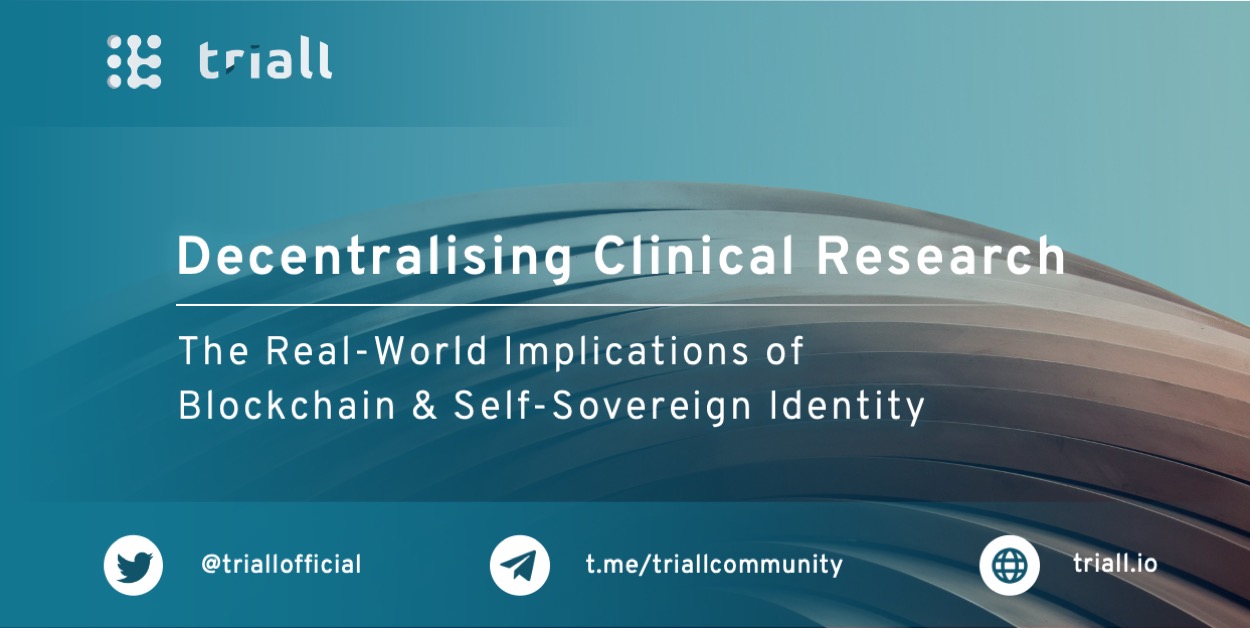 Decentralising clinical research: the real-world implications of blockchain and SSI

In this article we take a closer look at decentralised clinical trials, the concept of decentralisation, and the impact of existing and emerging technology on clinical operations. Meet us in Amsterdam at Clinical Trials Europe 2022